From Hollywood to Westminster, from the Champs Elysée to the Marunouchi, the first official symphonic concert of KINGDOM HEARTS is set to enchant the world starting March 10, 2017 in Tokyo. Uniting the worlds and characters of FINAL FANTASY and Disney to create a brand new thrilling mythology, KINGDOM HEARTS follows the adventures of Sora, Goofy and Donald as they rescue their friends and the whole world. With two major games, KINGDOM HEARTS I and II, released on PlayStation 2 (and re-released in HD on PlayStation 3), and six spin off games over multiple platforms, the saga has touched millions of fans around the globe.
World class professional orchestra, such as the Tokyo Philarmonic Orchestra in Japan, will perform a selection of the best and most beloved music from the original soundtrack of the whole saga. The concert will feature more than 70 musicians on stage, with amazing HD video cinematics supervised by director Tetsuya Nomura himself. It will premiere in Tokyo on March 10, 2017, and tour the world henceforth. The long awaited official orchestral concert is about to start, so prepare to unleash again the power of the Keyblades and don’t miss this new adventure and experience! 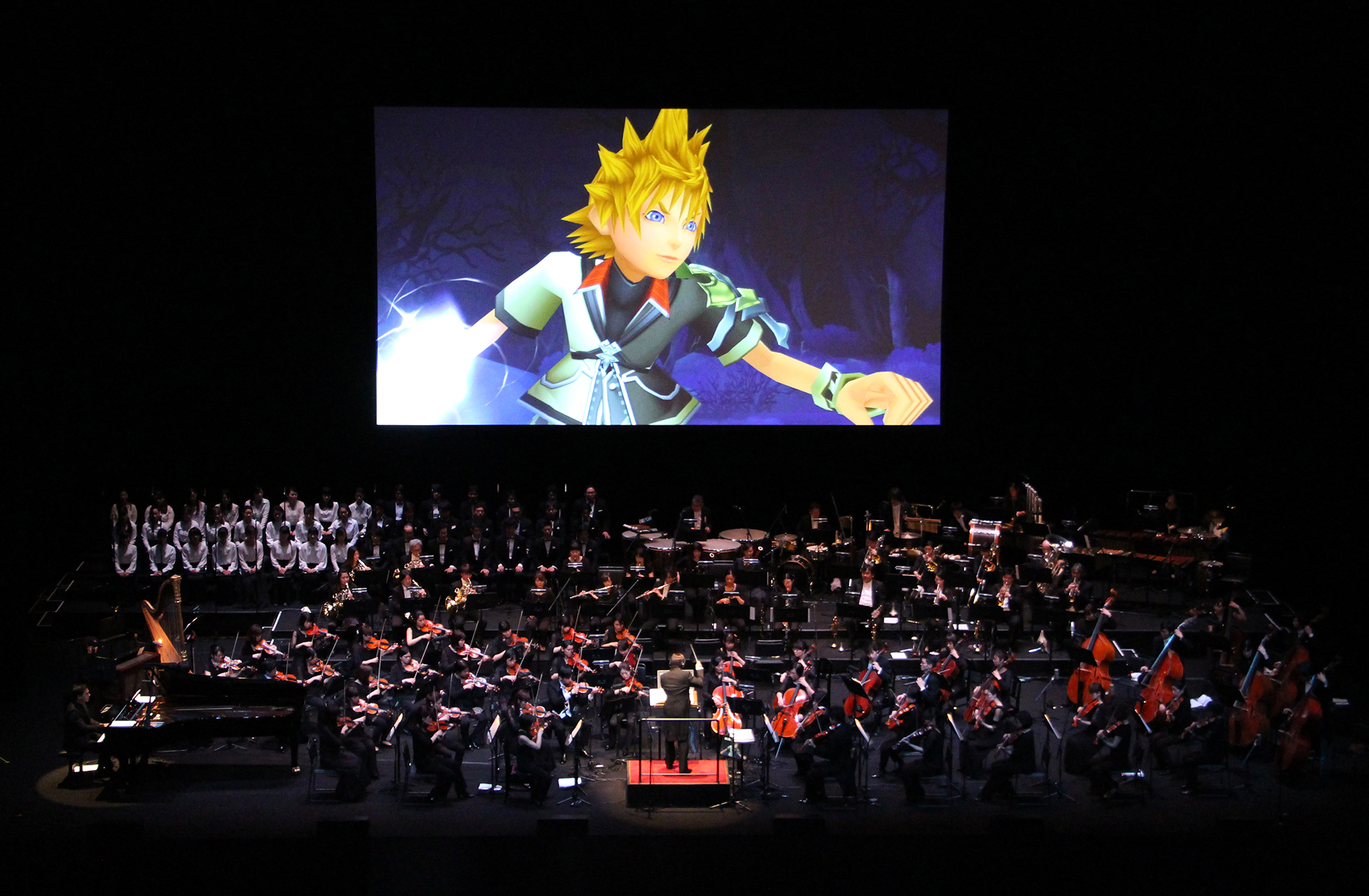 A Message from the Director and the Music Composer

"The idea of a KINGDOM HEARTS concert has been in the works for several years, but even so, I was astonished to learn that our music would be performed by a full orchestra, in other countries no less. I’ve been given the opportunity to oversee the creation of the title, logo, and many other aspects of this amazing production, and as the director of the series, I am confident that what we’ve created will touch the hearts of our beloved fans everywhere.
The World Tour is slated for 2017, the same year as the KINGDOM HEARTS 15th anniversary. In the meantime, fans will get a chance to explore the world of KINGDOM HEARTS HD 2.8 Final Chapter Prologue, which is coming out later this year. I hope the excitement and joy they get from the experience will only increase their anticipation for the release of KINGDOM HEARTS III."
Tetsuya Nomura, Director of the KINGDOM HEARTS series

“Please have a KINGDOM HEARTS orchestral concert.”
I heard this quite often, and it echoed my own feelings. I’ve wanted to have a concert for some time, and I’m happy to announce that it’s finally become a reality. When I began composing for the KINGDOM HEARTS series, I couldn’t even dream this day would come. But it has, thanks to our beloved fans. This concert and the music of KINGDOM HEARTS could not have existed without their undying support. I can’t thank them enough. The concert will encompass my feelings toward the series and those dear to me around the world. I look forward to seeing everyone there!
Yoko Shimomura, Composer for the KINGDOM HEARTS series

About the KINGDOM HEARTS series

Directed by Tetsuya Nomura, and developed jointly by Disney and Square Enix, the first KINGDOM HEARTS video game was released on March 28, 2002 on PlayStation 2. Now with over 25 million copies sold over 8 games and multiple platforms, the series has received worldwide acclaim. While the main protagonist, Sora, travels alongside Goofy and Donald, players can expect to meet more than 100 Disney characters and worlds (Beauty and the Beast, Hercules, Aladdin, The Lion King, Snow White, Sleeping Beauty, The Little Mermaid, The Nightmare Before Christmas and more) and numerous heroes and villains from the FINAL FANTASY video game franchise (See how Disney Characters and FINAL FANTASY Cameo Worlds connect in this trailer: https://youtu.be/55JvbOAVXA4).

Disney Concerts is part of Disney Music Group, the music arm of The Walt Disney Company.  Disney Concerts, a division of ABC Inc. licenses Disney music and content to symphony orchestras all over the world.  Disney Concerts currently licenses 14 different concert packages including, Fantasia, Pixar In Concert, The Nightmare Before Christmas, Alice In Wonderland, Frozen, Ratatouille, The Pirates of the Caribbean series (episodes I-IV), and Silly Symphonies, which last year accounted for approximately 325 performances in some of the world’s top venues, including, Lincoln Center, Royal Albert Hall, Sydney Opera House, Tokyo Forum and the Hollywood Bowl.

Disney Consumer Products and Interactive Media (DCPI) is the business segment of The Walt Disney Company (NYSE:DIS) that brings our Company’s stories and characters to life through innovative and engaging physical products and digital experiences across more than 100 categories, from toys and t-shirts, to apps, books and console games. DCPI comprises two main lines of business: Disney Consumer Products (DCP), and Disney Interactive (DI). The combined segment is home to world class teams of app and game developers, licensing and retail experts, a leading retail business (Disney Store), artists and storytellers, and technologists who inspire imaginations around the world.

More information on Square Enix Co., Ltd. can be found at http://www.jp.square-enix.com/.
*DRAGON QUEST, EIDOS, FINAL FANTASY, SQUARE ENIX, the SQUARE ENIX logo, SPACE INVADERS, TAITO and TOMB RAIDER are registered trademarks of the Square Enix Group. All other trademarks are properties of their respective owners.

Presentation made under license from Disney Concerts, a division of ABC Inc. © Disney All rights reserved.