After celebrating the 15th anniversary of the KINGDOM HEARTS video game series in major cities with the launch of the first-ever official orchestral concert tour in 2017, the KINGDOM HEARTS Orchestra - World Tour - concert series will be back on the road for a second wave of worldwide performances starting June 2018. 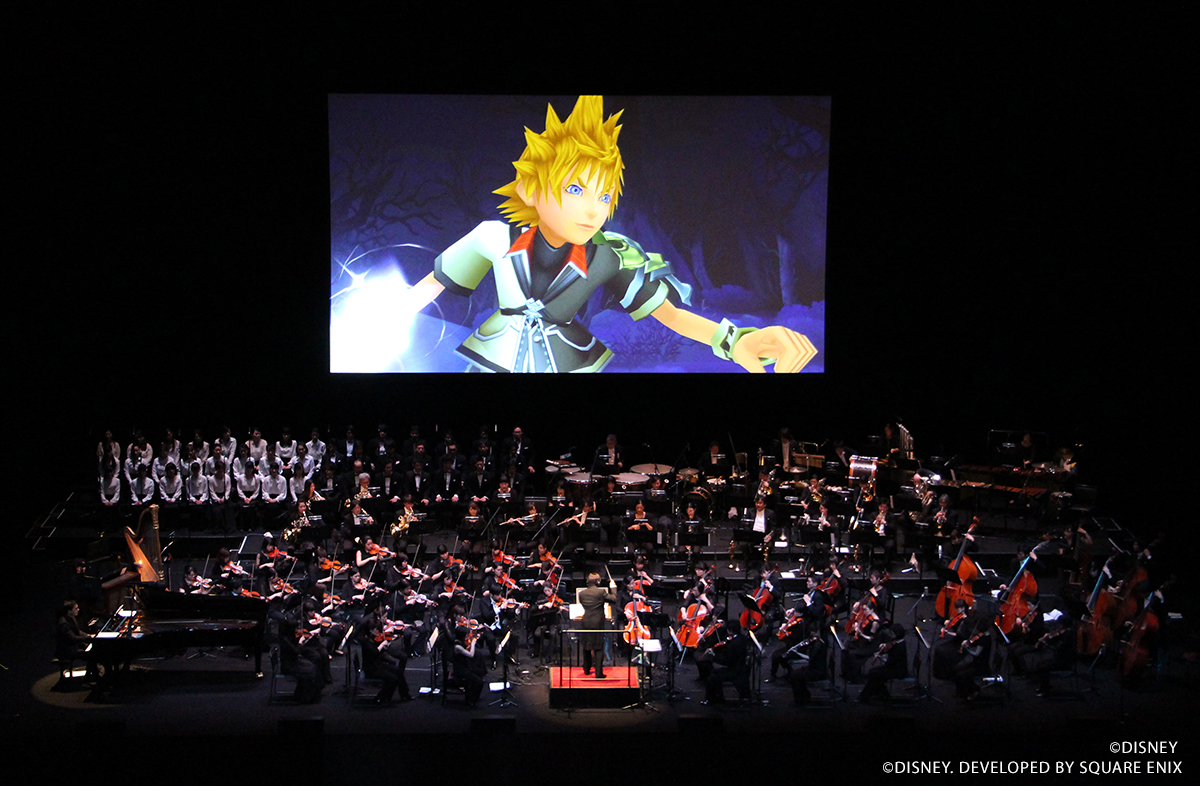 Before celebrating the upcoming KINGDOM HEARTS III video game with a renewed show for 2019, more cities around the world will have the chance to discover for the first time the acclaimed concert produced under the supervision of game director Tetsuya Nomura himself, and with music program supervised by original composer Yoko Shimomura. The show will Premiere in 2018 in places where it is long awaited, such as Canada, Australia, Germany, Italy, and numerous US cities. After performances at the Dolby Theatre in Los Angeles (the venue of the Academy Awards©), Salle Pleyel in Paris (home of the Cesar), the Central Hall Westminster in London and the Forum A in Tokyo, the show will travel in 2018 to more prestigious venues such as the Sydney Opera House, the Gasteig in Munich, the KBS Hall in Seoul, and the Auditorium Theatre in Chicago.

Tickets will be available for pre-sale purchase in selected cities starting March 4, 2018 at shop.wildfaery.com (from 12pm local time of each city). Public on sale will then start from March 13, 2018. Check update and latest news at the official Facebook page kh.wildfaery.com

Keep in touch by subscribing to the official tour Facebook page: http://kh.wildfaery.com

Uniting the worlds and characters of FINAL FANTASY and Disney to create a brand new thrilling mythology, KINGDOM HEARTS follows the adventures of Sora, Goofy and Donald as they rescue their friends and the whole world. With two major games, KINGDOM HEARTS I and II, released on PlayStation 2 (and re-released in HD on PlayStation 3 and PlayStation 4), and six spin-off games over multiple platforms, the saga has touched millions of fans around the globe. KINGDOM HEARTS Orchestra- World Tour- is the first-ever official concert world tour of the saga, celebrating the fifteenth anniversary of the multi-million selling video game series and the upcoming release of its latest episode.

Select shows will feature music composer Yoko Shimomura as a special guest. She will appear on stage, and 100 VIP tickets are available for each show to meet and greet with her after the performance (one signature and one photo per person). Yoko Shimomura will appear for a limited number of shows due to a busy schedule. Check the schedule above for appearance information.

2- Exclusive Merchandising Lineup
The KINGDOM HEARTS Orchestra – World Tour – features an exclusive line of products that are only available for sale at each performance. A stunning 48-page concert program will be available featuring the first-ever cross-interview between director Tetsuya Nomura and composer Yoko Shimomura, along with many music notes and gorgeous illustrations.  In addition to the program, fans will find an official T-shirt with an original illustration of Sora’s Chief Conductor Keyblade with a stand in a deluxe box, as well as an elegant pouch and a cardholder.

3- Special-Edition CD
Twelve pieces from the concert have been recorded in their unique concert’s arranged version for a special-edition CD, with a gold-embossed package. Fans can relive their experience at the concert from the comfort of their home after the show!

Directed by Tetsuya Nomura, and developed jointly by Disney and Square Enix, the first KINGDOM HEARTS video game was released on March 28, 2002 on PlayStation 2. Now with over 25 million copies sold over 8 games and multiple platforms, the series has received worldwide acclaim. While the main protagonist, Sora, travels alongside Goofy and Donald, players can expect to meet more than 100 Disney characters and worlds (Beauty and the Beast, Hercules, Aladdin, The Lion King, Snow White, Sleeping Beauty, The Little Mermaid, The Nightmare Before Christmas and more) and numerous heroes and villains from the FINAL FANTASY video game franchise.  The mobile game KINGDOM HEARTS Union χ[Cross] for Android and iOS allows players to uncover story elements from the earliest part of the series’ history, as well as from the highly anticipated, upcoming KINGDOM HEARTS III for Xbox One X and the PlayStation 4.

Disney Concerts is the concert production and licensing division of Disney Music Group, the music arm of The Walt Disney Company.  Disney Concerts produces concerts and tours, and licenses Disney music and visual content to symphony orchestras and presenters on a worldwide basis.  Disney Concerts’ concert packages include a variety of formats, such as “live to picture” film concerts and themed instrumental and vocal compilation concerts, and range from instrumental-only symphonic performances to multimedia productions featuring live vocalists and choir.  Current titles include the Star Wars Film Concert Series (Episodes IV-VII), Beauty and the Beast, The Little Mermaid, Fantasia, Pixar In Concert, The Nightmare Before Christmas, Alice In Wonderland, Frozen, Ratatouille, The Pirates of the Caribbean series (Episodes I-IV), and Silly Symphonies, which last year collectively accounted for over 400 performances in many of the world’s top concert venues, including Lincoln Center, Royal Albert Hall, Sydney Opera House, Tokyo Forum and the Hollywood Bowl. Numerous new concert packages and touring productions from Disney’s portfolio of studios, including Disney’s feature animation and live action studios, Pixar, Lucasfilm and Marvel, are currently in development.

Disney Consumer Products and Interactive Media (DCPI) is the business segment of The Walt Disney Company (NYSE:DIS) that brings the Company’s stories and characters to life through innovative and engaging physical products and digital experiences across more than 100 categories, from toys and t-shirts, to apps, books and console games. DCPI comprises four main lines of business: Global Licensing, Disney Retail, Publishing and Digital Media, and Games & Interactive Experiences. The segment is home to world-class teams of app and game developers, licensing and retail experts, a leading retail business (Disney Store), artists and storytellers, and technologists who inspire imaginations and bring the magic of Disney into the daily lives of families and fans around the world.